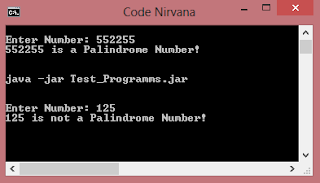 What is a Palindrome Number?

A palindromic number or palindrome number is a number that remains the same when its digits are reversed. Like 16461.

After understanding the meaning of palindrome number, its get easier for us to build a program to check whether a number is palindrome or not? So, as per the above definition we will take a number and than check if it remains same after getting reversed! so, the main logic behind this program is to take a number(input) and reverse it and than compare the reversed number with the number at the time of input. Lets see how to do it...

explain me in detail code for palindrome

The above article explains about palindrome and its code in detail!
What you want to know, or which part you didn't understand?

sir , please explain 12 and 16 line in detail .thankyou in advance

Well before explaining I will suggest you to first run this program on paper (manually) for better understanding of the logic used!

Hope you got our point, for more help feel free to contact us!

Thanks for the explanation! :)

sir can you explain me the full logic of palindrome how it is done?

please be specific about your problem, which example you didn't understand?

Palindrome is just a number which remains the same on reversing it! So the logic is same as Reverse Number and further we just compared the reversed number with the input!
Hope this helps to get the logic behind this!

palindrome is means to check it can reverse, so we getting number after dat we createing input after i cant understand.. pls help me wat logic s going inside it to check palinderome or nor pls help me

First input number, make a copy of that num variable to variable n, apply reverse number logic to n and store reversed number in variable rev, finally check whether rev == num.... if condition is true means palindrome otherwise not!
Hope this gives you better understanding about the logic and program concept!

Number reversing process is done there! nothing much to explain... check reverse number post @ our blog.

BufferedReader, is a character stream I/O class. Character streams provide a convenient way for input and output in terms of characters (Unicode). BufferedReader is mostly used for taking input from the console, System.in. It takes an InputStreamReader object as an argument.

Sir,
How do i check weather a String is palindrome or not?

Following comparison is not happening when a palindrome number is given e.g. 454

reversed number is not equaling to the number inputted ..please let us know

@Srinath I tested the above code again and its working fine!
check here: ideone.com/H7WSmw

i was wondering if you could help me solve this problem?

Zoe likes palindromes, and thinks them to be nice. A palindrome is just an integer that reads the same backwards and forwards - so 6, 11 and 121 are all palindromes, while 10, 12, 223 and 2244 are not (even though 010=10, we don't consider leading zeroes when determining whether a number is a palindrome).

Input
The first line of the input gives the number of test cases, T. T lines follow. Each line contains two integers, A and B - the endpoints of the interval Zoe is looking at.

This problem is from Google Code Jam 2013 Qualification round.
Many posts/editorials already available on this, you can check there!

if taking 121 as input
while loop will continue till it finds num<=0
in last and thirds time logic will store num=1 which further makes rev = 12+10+1;
rev=n; satisfies condition hence it is palindrome.

It will be '0*10+rmd' in first run, means the last digit(rmd) will be stored in rev first!
Tryout this logic manually and you will get my point.

Feel free to ask for any help!

Very Clear! Thank you so much

I can't understand logic which is used in this program. Can u briefly explain in it...

Sir why num= num/10 is wrritten what its use

Its used to reduce the number after each iteration
Suppose num = 123 initially,
after the first iteration num is changes to 12 ( 123/10 ) and this process goes on until our condition ( while(num > 0) ) is true!