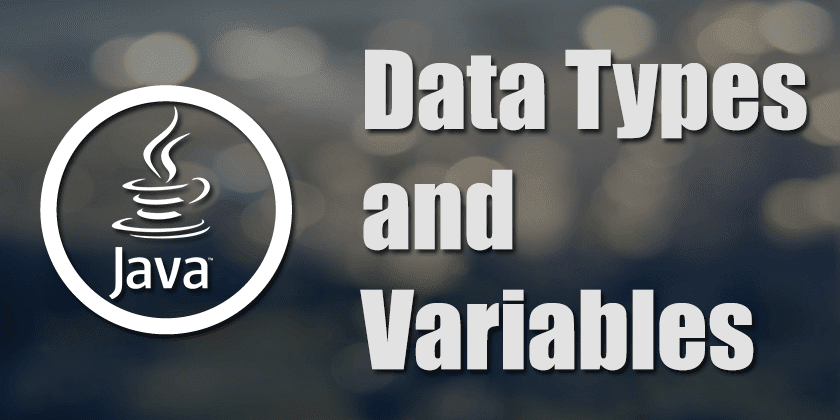 Data Types and Variables In Java

Welcome to the second tutorial by Code Nirvana, here we are going to learn a very important aspect of Java programming, about data types and variables, there is virtually no good program you can write without the knowledge of these. From this tutorial we are going to use JDK 8, to keep ourselves updated. So let’s code on…
In case you missed our previous tutorial on Introduction to Java Programming, Visit Here

Variables are simply named memory spaces to store some kind of data. Imagine you write up phone numbers of your class friends on separate papers and put it in separate envelopes and then you write the friend’s name on each envelope that you remember in which envelope you can find the required phone number. So, in this each friend’s name would be a variable and the paper and envelope would be the physical memory. A variable name should be meaningful and according to what it holds, this is a good practice but hard for lazy guys.. :)

But there are some restrictions on variable naming in Java, keep these in mind:
1. They must not begin with a digit.
2. Variable names are case sensitive. NIRVANA is not same as nirvana.
3. The name must not be a Java keyword.
4. You may give an underscore but white spaces…...banned!!!

Now, we know that variables hold data, but of what type? That information is specified by the variable’s data type. As Java has got distinct data types, it’s called a “Strongly typed language” unlike some other language like JavaScript.
Look at the hierarchy diagram to understand the organization of data types in Java. 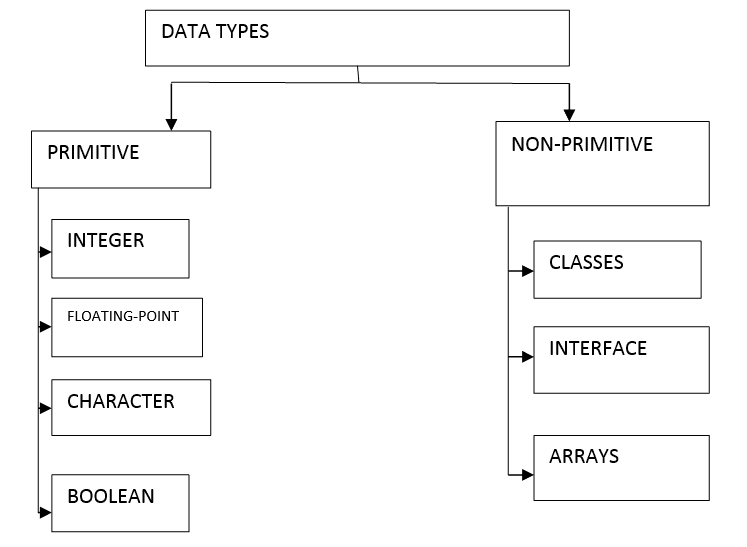 In this tutorial we are going to learn about the left part of the diagram, i.e, Primitive data types.

Integer type of data type can hold whole number values, such as 1234, 656, -108..etc. There are four kinds of integer data types, which we use according to the size of value we need they are byte, short, int and long. They sizes that they can hold are like this:

Now when we want to take a whole number in a variable which integer type to choose? As I said earlier it depends on the size of the constant/literal (value) it holds. Let’s try some example-

Note: In common practice we use the int data type mostly for any size of variable, if it doesn't increase the size limit, then we use long.

Examples:
Suppose it’s a movie rating:
float rate=3.5F;
[If you don’t mention F a syntax error ‘possible loss of precision’ would show up]

The sizes of float and double are

In here we only have char data type; it’s used to store only one character. Don’t forget to enclose its value with single quotes(‘’)
Example:
char c=’a’;

They represent outcome of a condition, either true or false, these can be the only values of Boolean type. It is declared by boolean keyword.
Example:
boolean result=true;
Or,
boolean result=false;
There is also another String type, but we will discuss it when we will cover up classes, objects and functions. Because unlike the others String is a class, and we work with its objects.

In Java we may sometimes need to change one type to another according our needs, and we may easily do this like this:

It will convert variable to type2.
Example:
int a=9;
double convert=(double)a;
The type is changed.

So, this was it, we will discuss the String data type and scope of variables in some tutorials later. If you have any questions in this part please feel free to comment, don’t forget to subscribe the Code Nirvana newsletter or to share us on Facebook. To demand more tutorials, Contact Us. Keep Coding…